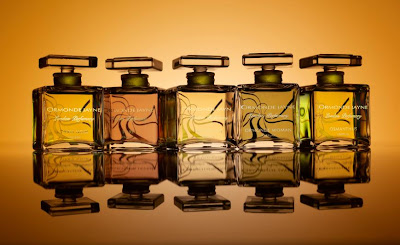 I got the Ormonde Jayne Discovery set about half a year ago. Right away I started trying on the scents. They smelled good, really really good but I just couldn't bring myself to love them. And it was worse that that, I didn't even like them. They just did not feel comfortable and I wasn't enjoying myself  wearing them. I didn't understand, if something smells good, you DO like the scent, don't you? Every now and then I bought them out, tried one on, but no go. WTF?

But I persisted and eventually, many many tries later, it dawned on me. The Ormonde Jaynes have a very special energy about themselves. Right away when opening that box of samples there is this cloud of a certain type of person. A very self confident person. Someone who knows his or her place in the world. Someone who steps into a room, immediatly becomes the center of attention and just OWNS the room and everything in it. Someone that I'd very much like to be but I know  I'm not and that made me feel like a miserable failure. Yes, that was the feeling that came with the scents.

When I had that realisation, the spell was broken. I realised it's very two-year-odish to believe that you're a success only when everyone else is looking at you. I think most people would agree that it's much more fun to just cruise the rooms of a party, sometimes talk, sometimes listen and just interact with the other guests, exploring their worlds as they get to explore mine. To "own" people is just a very bizarre notion and doesn't belong in a modern, adult mindset.

And the Ormonde Jayne scents, they went from being something that made me feel bad about my very irrational shortcomings into a set of perfumes that smell very very good.

I've said it before and I'll say it again, who needs a shrink when there is perfume like this?
Posted by flavourfanatic at 12:44 PM