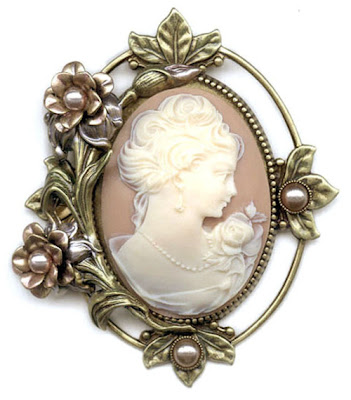 A while ago I stopped by at the Etat Libre d'Oranges website and saw that their 2 new scents, "Bijou Romantique" and "Fils de Dieu du riz et des agrumes" are now available for ordering. Of course I couldn't resist and now I've had the chance to try them out.

Now, Etat Libre d'Orange are known for their, eeeh,  vivid, so to say, sales texts but there is nothing explicit in their description of Bijou Romantique:

"This is the portrait of a lady. She can be seen in the feminine cameo, in the soft, delicate profile, in the dreamy image of an incandescent beauty. What once was shell has been carved in relief by a devoted artisan, to emerge as an idealized woman. Jewels, too..."

I think this is a spot on description, Bijou Romantique does indeed come across as a cameo, only ELdO forgot to mention that it's a 15 foot tall cameo, made of  cream and powder, fixed on a slab of granite.

Bijout Romantique starts as a big cloud of pastry cream. There is white chocolate, vanilla, a hint of strawberry milkshake and lots of fluffy whipping  cream, fresh from the farm. There is a powdery cosmetics note in there as well, getting along just fine with the cream. Even though it's full of sweet confectionery notes, BR never gets cloying or overly sweet, its very well balanced. As the scent wears the sweetness evaporates. Steely iris is revealed and the powder moves towards chalk dust, blue ink, faint pencil shavings and cold stone. At the extreme drydown, after a good nights sleep, there is a beautiful vanilla and tobacco accord lingering. A very nice transition! 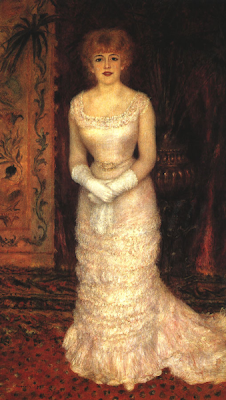 I keep keep having these associations to how a womans life in the 19th century might have been. As the scent starts out she's a young girl, sweet, all smiles and eager to see what life has in store for her. Maybe she marries that handsome captain. He sails his ship on the seven seas, she sits at home, waiting for him, doing needlepoint, raising children, everything appropriate for a decent woman of her standards. But deep down inside she wonders, is this all? I have everything a woman can wish for but I'm still not happy? Lets see if we can tight up that whalebone corset one inch more, that might push those silly thoughts right out of my head!

The children grow up, time goes on. Her husband always had a bit of a drinking problem and after he's killed in a brawl she realizes there was a gambling problem as well. He has gambled away everything they had and then some more, leaving her dirt poor. She takes up a position as a governess in order to pay back the debts and gets pneumoconiosis from all the chalk dust she breathes in, trying to teach those dumb, despicable kids to read from the blackboard. By now, there are no smiles to be seen. Life has hardened her. Her hair is gray and the children call her a witch when they think she cannot hear. Unfortunately she dies before it is discovered that she's the rightful heiress to a grand fortune. One that had allowed her to pay back all debts and then live in luxury for the rest of her life.

So, what is my verdict of Bijou Romantique? Well it is a big time "lady"-scent indeed. I'm sure fans of powdery cosmetic type of scents will love it, it does remind me of a tamer, but more sophisticated, version of Labdanum 18. I might be the wrong person to review it as I still haven't "got" the powder thing but who knows, a few more wears of BR and maybe "powder" will show up on my list of acquired tastes for spring 2012?

Pic:  Fuckyeahcameos (where else?) and Wikipedia


Posted by flavourfanatic at 9:21 PM