Vessel Parfums - Occult and my first ever DRAW!!!

Before I had kids my favourite past time was reading books. All kinds of books. I still love them but nowadays I've hardly ever get the time to read one from start to finish. I often get books at the library, feeling all excited, but at the time I get those mails telling me that I better return the books right away or get fined, I've usually haven't managed to even open them... 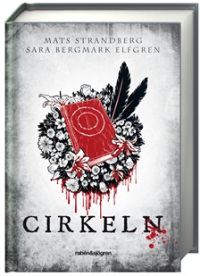 Last week though, I picked up a book named "Cirkeln" ("The Circle" in English) by Mats Strandgren and Sara Bergmark Elfgren. This book is really aimed at teenagers and tells a story about 6 high school girls who find out that they are witches with superpowers and only by working together they can prevent the upcoming destruction of the world. I probably would not have looked twice at a book like this if it wasn't for the fact that several reviewers have hailed it as the best thing since Harry Potter. And, was it that good? Yes!!! I haven't been able to put it down during the last few days, all I've been thinking about is "What will happen next?". The good thing about it is not the story about the paranormal stuff in itself but the portraits of the characters, the dynamics between them and their lives, going to school, in a God forgotten Swedish small town. I don't think it has been translated to any other languages yet, but keep an eye out for it any ways because I'm sure it will be.

I've also been lucky to been wearing the perfect scent while reading this book, namely "Occult" from Vessel Perfums. First note to stand out is sweet burnt honey. After a while there is incense. This reminds me of the type of incense my grand mother used to burn when she was trying to hide the fact that she had been smoking indoors. She claims that she quit smoking in the 80ies, but we still catch her with a cigar behind the house every now and then... But back to Occult, there is vanilla, wood, hints of soft leather and musk. In all, the notes are very gentle and well blended. If I'm to picture someone wearing this it would be a girl sleepwalking over a graveyard, hair blowing in the wind, she's wearing a long white cotton night gown and a silver cross around her neck. It would be perfectly innocent if it wasn't for that strange silvery smoke and strings of ectoplasm coming out of her mouth...

My only complaint is that Occult is rather faint and doesn't last that long on my skin, but, I suppose, one can always dab on some more.

Vessel Parfums is a relatively new company, founded in 2010, by Hollis Schwanz.  According to their website: "She was bored by the high volume of generic fragrance launches in the marketplace, and decided to develop a line of perfumes inspired by eras in time and the moods they evoke". Occult is their first fragrance release and it was: "Made to enhance the wearer’s personal mystery, not to coat him or her in a pre-fabricated narrative". One can only say YAY to that! 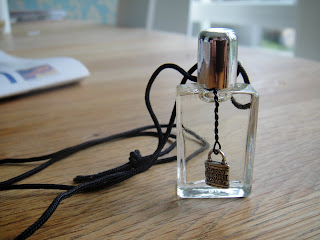 Now to the part everybody has been waiting for! I've been sent a small bottle of Occult that you can see in the picture above. It's fitted with a small silver pendant and a necklace string so it can be worn around the neck. As much as I'd love to keep it to myself I also love to help out new ventures, so I've decided that one lucky reader will be eligible to win my bottle. There are a few drops of perfume missing due to me making this review. If you want it, all you have to do is make a comment on this blog post and tell me why you want to try Occult. This is no essay competition, something like "It sounds nice" is perfectly acceptable.

More rules for the draw is that you can live anywhere in the world. Last day to make a comment is 2nd of September 2011. The winner will be chosen randomly and announced some time next weekend. I will not be responsible for damage or loss caused by postal services. Now, go ahead and make those comments and Good Luck!

Posted by flavourfanatic at 10:37 AM